From weight loss to vision loss; from serious illness to life’s setbacks, triathlons can change your life.  A bold statement, but one I can make from my own experience and the experiences of my Tri Lake Triathlon clubmates.

Well, here is my little story.  In 2009 I was diagnosed with macular degeneration (AMD).  I had never heard of it before.  To put it simply, blood vessels leak in the back of the eye, causing loss of Central Vision.  Treatment involves having a needle injection into the eyeball. People’s reaction is always the same when I tell them this. Shrug their shoulders and shake their head, bet you’re doing it right now! This treatment worked for several years, but in August 2015, the injections stopped working.  With no other treatment options, my vision deteriorated.  I’m now left with only approx. 10% vision in my right eye and I’m classified as legally blind or Visually Impaired.

As you can imagine this led to huge changes in my life and my family’s lives, both physically, socially and mentally.  It was a dark period in my life.  I went through all the stages that most people go through when faced with a life-changing event: denial, anger, frustration and finally acceptance.  I had become withdrawn and did not venture out of the house, almost afraid anyone would see me, say “Hello” and for me to not recognise them and for them to think I was ignoring them. It was not just affecting me as an individual but also the, at times forgotten, family.

The turning point was in 2017, when I attended a “Try a Sports Day” organised by Galway Sports Partnership.  Here I met with up with the Galway Visually Impaired Activity group and was introduced to riding a tandem for the first time.  I immediately fell in love with the freedom of riding a bicycle again, albeit from the back seat!  As a group, we would go for leisurely Sunday spins every fortnight, on tandem bikes.  Aisling (my wife) and I finally made the decision to get our own tandem and it arrived from UK, by courier, a week before Christmas.  I couldn’t wait to try it out but ice, snow and frost delayed any notion of going for a spin.  Our maiden voyage was in our estate, cycling around all the loops, getting used to the tandem.  Our tandem-learning experience didn’t go unnoticed.  Soon after that, we met Tommy Carton outside ‘Leaf and Bean’ café.  He said he had seen us on our new bike and he casually volunteered to take me out for a spin.  Neither he nor I realised what we had let ourselves in for.  Our first trip was to Ballindine and back home; we both nearly had a small heart attack along the way!  After a few more outings, Tommy suggested going for a Sunday cycle with the Tri-Lakes crew.  “No problem,” I said.  At the start, we found it tough but over time, getting fitter, it became easier.  On these rides, I met new people and made new friends.  Talking and slagging, led to rumblings of “Leo, why don’t you do a triathlon?”.  My answer was “Are you mad?”.  A shout from the back of the group said: “I’ll do one with you”.  It was Stephen, the club chairman. “Ok, sound,” I said jokingly.  Another shout “You’ll be well able for it”, unofficially, over the years, this has become the club motto.

I’d now made a commitment, but how would I do it?  After a bit of research on YouTube and Google, I discovered that, as a visually impaired athlete, I would be tethered to a guide/pilot with a 1m bungee cord for the swim, use a tandem for the bike section and would be tethered again to my partner for the run. Training started with Stephen: cycling on the tandem, going to Lough Hackett to swim and doing short runs around the park. Stephen and I competed in the club Time Trial series and did quite well.

My first Sprint triathlon as a VI athlete was on the 16th of June 2018 in Westport with Stephen. This was it.  It was now real, as we set off in our van into the unknown.  As usual, at the start of every triathlon, after a bit of pushing and shoving, we got into our rhythm.  About 20 minutes and 750m swim later we were helped out of the water, “that’s the swim done”.  Tick!  Next onto the bike.  We knew we would be ok on the 20km bike leg.  We were amazed by all the support we got from the sidelines, but most of all from other competitors on the route.  As we passed we heard shouts of “fair play lads, ye are flying it” and “well done”.  There’s something special about fellow competitors taking the time to acknowledge your efforts and supporting you.  After 35 minutes, bike done.  Tick!  Next, as my club mates know, was my least favourite: the run, 5km of an undulating trail run around Westport house.  Again, the support we were greeted with was amazing. Other runners would run beside us chatting and offering words of encouragement. After 29 minutes we crossed the finish line.  Tick! That’s it done and no one got killed!  First triathlon completed in 1 hour 24 minutes.  When I eventually got my breath back and was surrounded by my wife, kids and fellow club mates, I could finally take it all in. Even though tired, wet and cold, the feeling was amazing.  Not just completing my first triathlon as a VI athlete, but the fact that I did it surrounded by family and friends, and we had all done it together.  Thank you, everyone.

The triathlon community and every triathlon club accepted us with open arms and did everything they could to accommodate us, even though they had never had a VI athlete compete in their events before. To you all, I applaud you, you are a credit to the triathlon community. On my journey, I have met some incredible people, visually impaired athletes, physically impaired athletes and the one common attitude they all have is positivity. They only see what they can do, not what they can’t do. They have all found a new lease of life through sport.

So, from 2 years of inactivity, staying at home feeling sorry for myself, I have gone on this year to complete seven sprint triathlons all over the country, from Galway to Dublin and Athlone to Belfast, finishing 3rd in the National Para Championship.  We also competed in the Invacare Para-Cycling league around the country earlier in the year.

As you can see, my own triathlon club Tri-Lakes, have been absolutely wonderful in their support for me, starting out as a Visually Impaired athlete. They are not just a fantastic club, but they are like one big happy family; always there to help and advise, in any way they can.  At the moment, I have 4 pilots/guides from the club: Tommy Carton, Stephen Corrigan, Nick Skehan and Therese Murray.  I owe a sincere thank you to each and every one of you for your time, commitment, encouragement and mostly your friendship. Without you stepping forward and taking a chance, I would not be in the place I am today or on the journey that I am on.  It’s been some year and it’s not over yet.

What’s next? My dream would be to represent Ireland as a Para Athlete at international triathlons worldwide with the ultimate being a Para athlete in the Paralympics in Tokyo 2020.  It will be hard, but not impossible.  Last year I thought doing a triathlon would be impossible. It all started with that first small step.  With a bit of luck, fingers crossed, I might represent Ireland someday in the future. What a journey that would be! 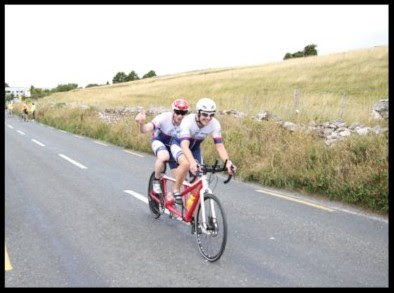 Here is a view from the front of Leo’s flying machine at the Port Beach Triathlon last weekend.